Movies and Cricket or Sachin Tendulkar or Amitabh Bachchan, if you are living in India then you will realize how big these 2 things are in the country. In India people worships their favorite idols from Cricket to Movies. But, for now let’s talk about the movies. Do you think acting is an easy task? No, dear friend acting is and will always be tough task and if you don’t have proper training about it then you will not be success in movies, TV series or even in commercials. Again, if you think that son and daughters of big stars can get direct entry in movies and will get success then again you are wrong. A

bhishek Bachchan who is a son of greatest living legend Amitabh Bachchan also had to learn acting in acting schools. Many people from India want to become an aspiring actor and to be a super star. But without getting proper training from any acting school no one can become a good actor. If you know acting but don’t have proper craft in it then you will be failed. Everyone is not a Govinda from Swarg movie who gets the direct entry as main actor from spot boy. So, don’t believe on your luck only but also believe the hard work and experience you put behind your training.

Taking acting course or training from an institute will be good enough to get direct entry in bollywood? No my dear friend, there is a long process behind it. Acting schools or institutes gives you the platform to learn and become master in acting but it won’t give you experience. Very few lucky people gets the direct entry after the acting school but what about the remaining ones? One has to gain acting experience by doing theaters and other small dramas. It boosts your confidence and allows you to perform well during any movie or series auditions. Movies business evolved, earlier if you have any friend in film industry then you may get direct offer but now even the movie director or producers hires casting company to cast for them.

Convinced now to get the acting training to enter in Bollywood? Ok, let’s check out some of the finest acting schools in India along with fees, address and admission process. We have done some research of top acting schools in various Indian cities including Mumbai, Delhi, Pune, Bangalore & Hyderabad.

Mumbai is the proper hub of Bollywood so, it’s easy for you to get admission in one of the acting schools in Mumbai. Yes, if you get invitation for any audition then it will be easier for you to travel because high chance is there that the audition will be in the city itself. One other big reason is networking, yes many celebrity kids are doing their acting classes in Mumbai only so, you get to know them and it will be easy for you to get access to shooting area to understand the film process.

At Roshan Taneja’s school of acting many popular actors did their training which includes.

Some of the biggest current bollywood stars learned their acting skills at Anupam Kher’s Actor Prepares Acting School. These stars are

Barry John’s Acting Studio has produced some of the finest actors of Bollywood. Some alumni and ex students are 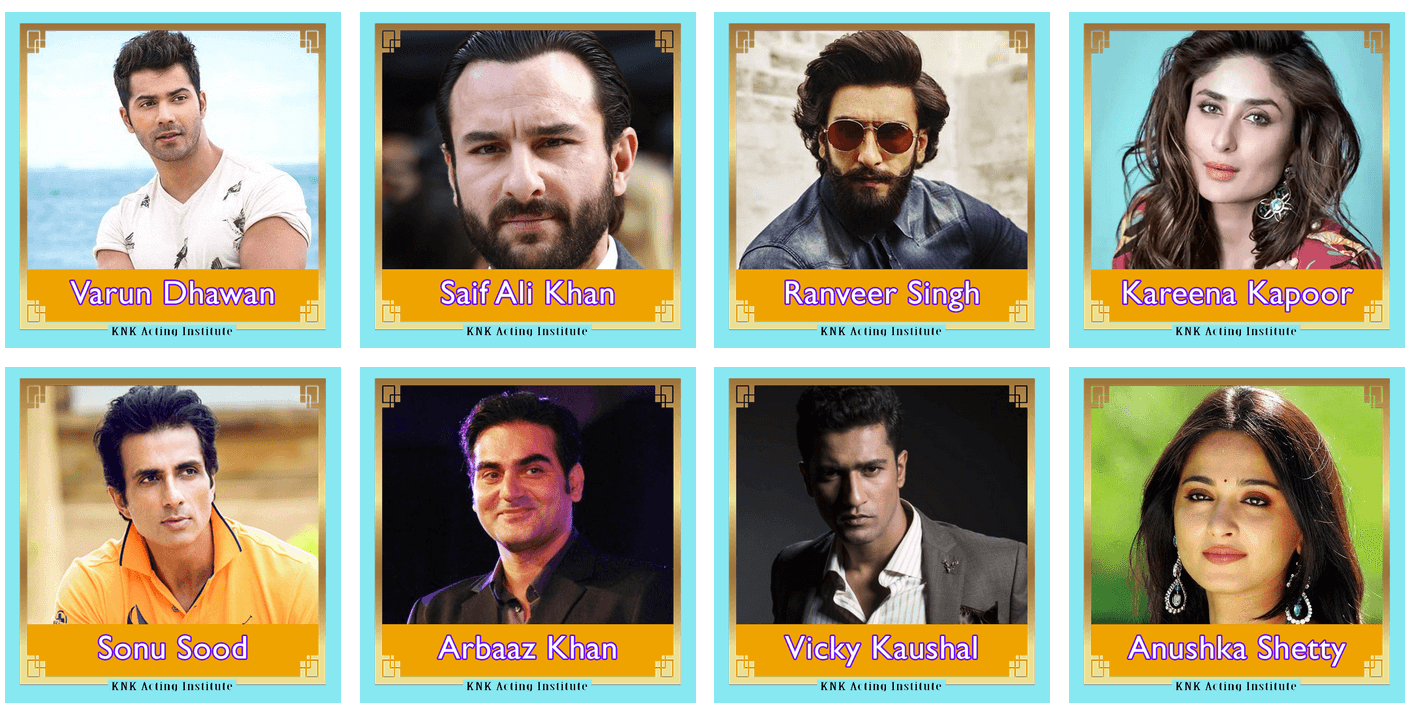 Kishore Namit Kapoor Acting Institute is one of the most successful acting institute in Mumbai and the reason is that it has produced best actors of Bollywood. Some of the famous alumni of this institute are Saif Ali Khan, Varun Dhawan, Ranveer Singh, Kareena Kapoor, Sonu Sood, Vicky Kaushal, Anushka Shetty and many more. You may have imagined why Varun Dhawan is alumni of each school because they have learned different acting methods and process from different school so, they can be a good actors in Bollywood movie. At Kishore Namit Kapoor’s acting institute the program includes body language, character study, yoga, movement exercise, dance, dubbing and many other acting skills.

Delhi is actually very far from dream city Mumbai, but that doesn’t mean Delhi don’t have the best acting schools in India. Few of the finest acting schools are located in Delhi and many Bollywood actors learned their acting in Delhi only.

National School of Drama is popularly known as NSD in Delhi. NSD was started in 1959 by Sangeet Natak Akademi and became an organization under the Ministry of Culture, Government of India in 1975. Many alumni of NSD speaks highly of this institute during their interviews. Few of the finest students from National School of Drama are Om Puri, Naseeruddin Shah, Shah Rukh Khan, Anupam Kher, Irfan Khan, Ashutosh Rana, Raj Babbar and Nawazuddin Siddiqui. At National school of drama you can do 3 year Diploma course in Dramatic arts. At National School of Drama you will get the value of Theater because it’s your core strength before making appearance in big screen. Theater boosts your confidence and understanding of acting and the complete process

Film and Television Institute of India is also popularly known as FTII. FTII started in 1960 and this institute is under Information and Broadcasting Ministry, Government of India. Alumni and students of this institute got many awards at international film festivals thus it can be considered as one of the most trusted acting schools of India. FTTI don’t only give training in Acting but the course includes Sound Design, Editing, Art Direction, Production Design, Screen Play Writing, Video editing and many more. Some of the popular alumni of FTII are Shabana Azmi, Om Puri, Naseeruddin Shah, Jaya Bachchan, Rajkumar Hirani and Sanjay Leela Bhansali.